The Company completed a broad Prospectivity Analysis of the region between its Gilberton Gold Project and Georgetown where Kempton Minerals Pty Ltd has a 250K tonnes pa Gold Processing Plant that is currently on Care and Maintenance.

The plant is regularly maintained and is a possible processing option for The Company’s Gilberton Gold Project. The prospectivity analysis resulted in The Company applying for 6 tenements close to Georgetown so as to compliment ActivEX’s existing Gilberton Gold Project of which three have been granted. In addition, the Prospectivity Analysis highlighted felsic intrusive centres including several historical gold prospects and similar lithological/metallogenic characteristics to The Company’s intrusive centres at the Gilberton Gold Project. The tenement acquisition broadens ActivEX’s footprint in a gold prospective region of North Queensland.

The Georgetown Gold Project (Project) is situated within the Proterozoic Etheridge Province in northeast Queensland, approximately 400km west-northwest of Townsville and 80km north of the Gilberton Gold Project. The Project is in an area which is prospective for several metals (Au, Ag, Cu, Ta-Nb, Co) and a wide range of deposit styles (Thermal Aureole Gold hypozonal and mesozonal, Porphyry Breccia, and Intrusion Related epizonal) related to the emplacement of felsic magma.

The Etheridge Province in the region between Georgetown and Gilberton is comprised of variably metamorphosed and deformed sedimentary and volcanic rocks of Palaeo- to Mesoproterozoic age, intruded by Mesoproterozoic granitoids. The eastern margin is in faulted contact with the Palaeozoic Hodgkinson and Broken River provinces of the Tasman Orogen. Within the project area the dominant rocks are clastic and carbonate sediments that have been intruded by a mafic dyke swarm (Cobold Dolerite).

ActivEX has been reviewing the North Queensland Projects with a view to determining the exploration potential for LCT Pegmatites. To that end we are pleased to advise that the Company will be actively exploring for LCT Pegmatites within EPM 27812 of the Georgetown Gold Project in North Queensland. The Project is in an area which is prospective for several metals (Au, Ag, Cu, Ta-Nb, Co, Sn, W and Li) and a wide range of deposit styles

Through the study of Geological Site Observation Database (Published by Geological Survey of Queensland), the Company identified a historic lithium prospect (Buchanan) to the NW and historic tantalum prospects to the west of EPM 27812. The metallogenic camp labelled Glenrowan extends from EPM 27812 north east towards the Buchannan’s Lithium/Tantalum Prospect and includes a suite of felsic intrusives. 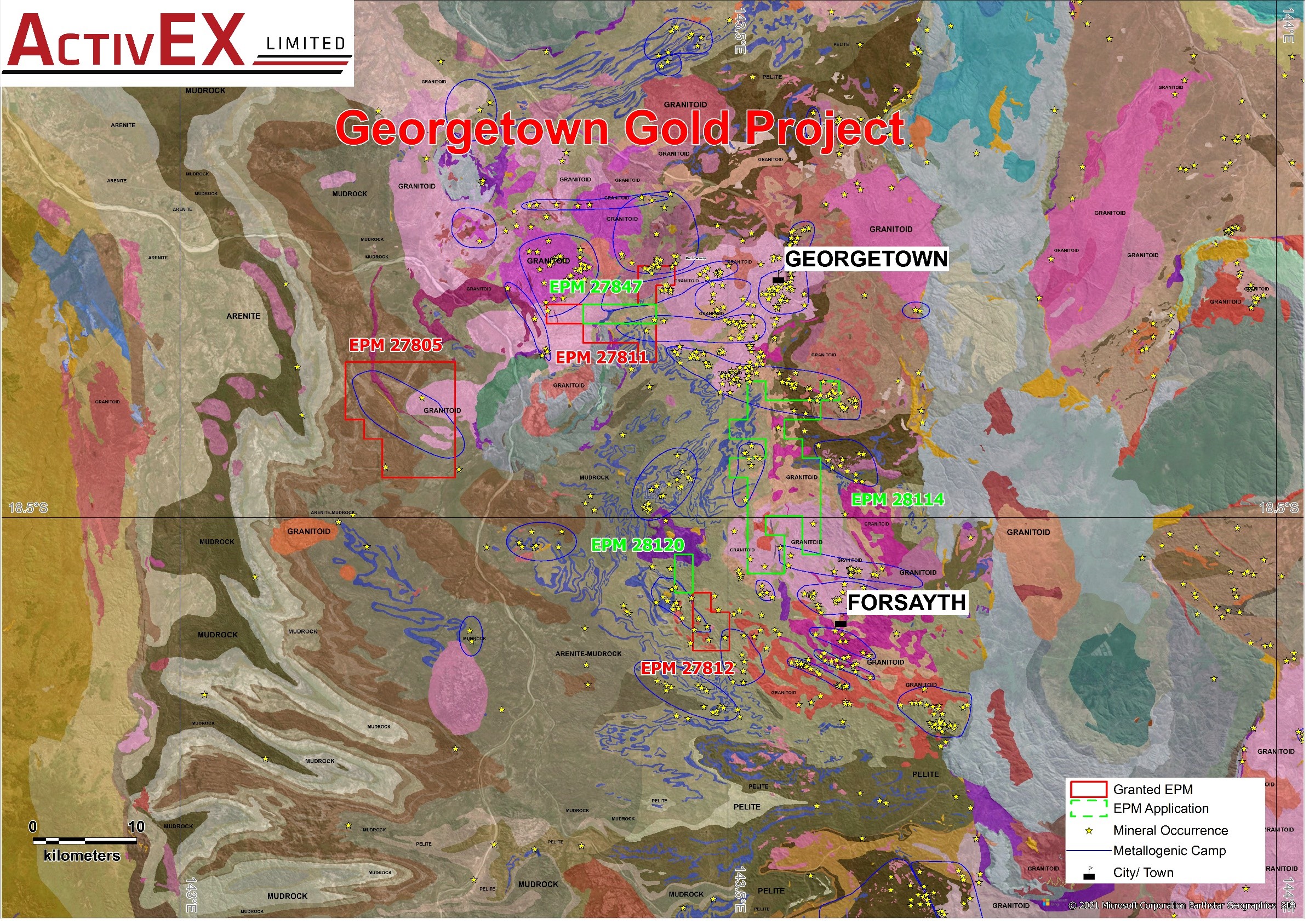