The Gilberton Gold Project consists of EPMs 18615, 18623 and 19207, which comprise a total of 143 sub-blocks and encompass an area of 464 sq. km. The Project is located in the Georgetown Province in northeast Queensland, approximately 300km west-northwest of Townsville. ActivEX Limited holds 100% interest in all the tenements.

– Highly prospective geological terrain with potential for a diverse range of deposit styles.
– Extensive tenement package held 100% by ActivEX Limited.
– Historical and modern mining of gold, base metals and uranium.
– Widespread precious and base metal anomalism.

The Gilberton Gold Project is located in an area that is prospective for a number of metals and a wide range of deposit styles. The world-class Kidston breccia hosted Au-Ag deposit occurs in similar geological terrain approximately 50km to the northeast.

The Gilberton Gold Project is located in northeast Queensland, approximately 300km due west-north west from Townsville, and 450km via sealed and unsealed roads from Townsville.

The Project tenements are located in variably undulating and partially cleared cattle grazing land.  Access to many areas is good and attained via gravel roads and station tracks. Access to some areas is hindered by rivers and a lack of vehicle tracks. 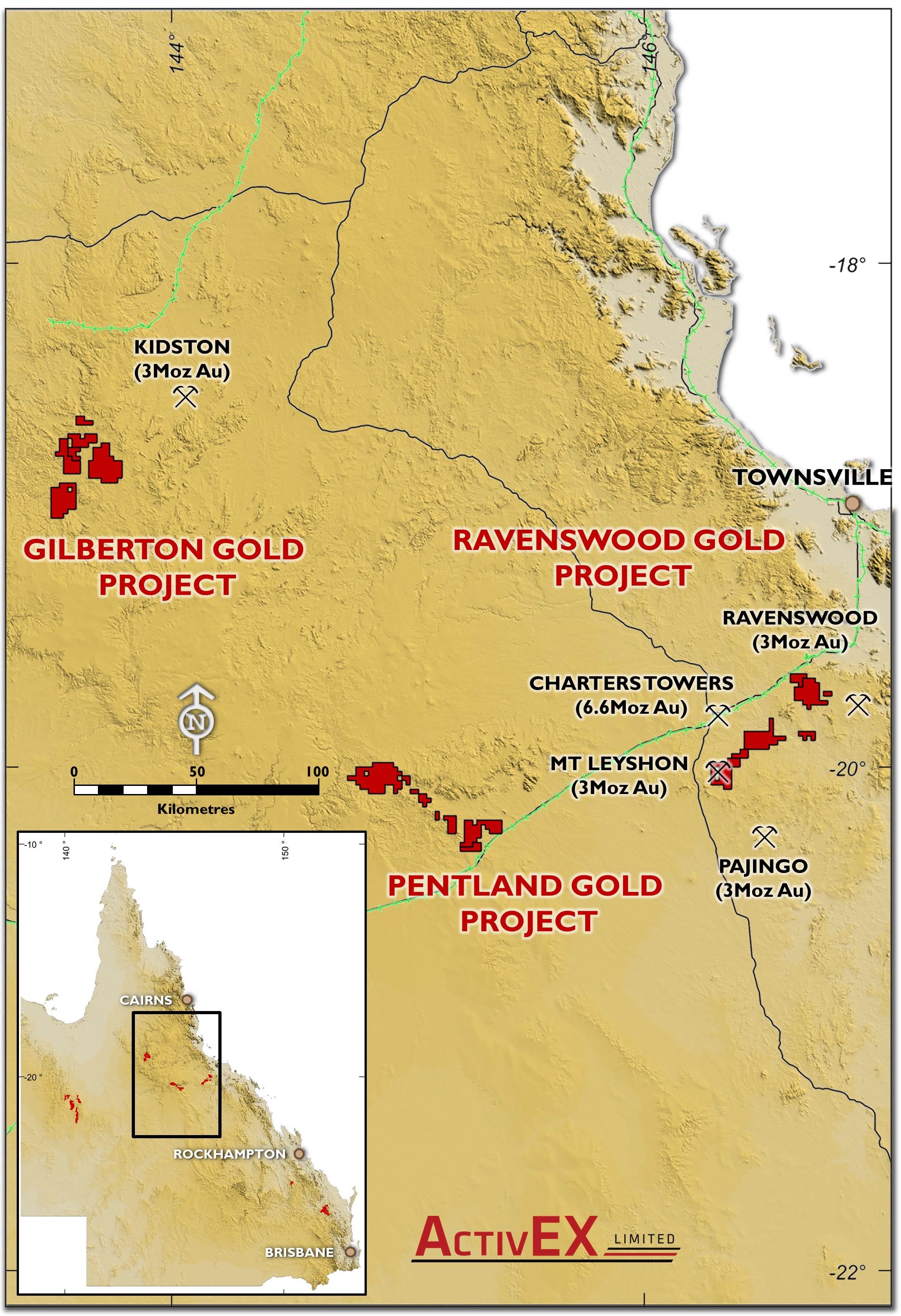 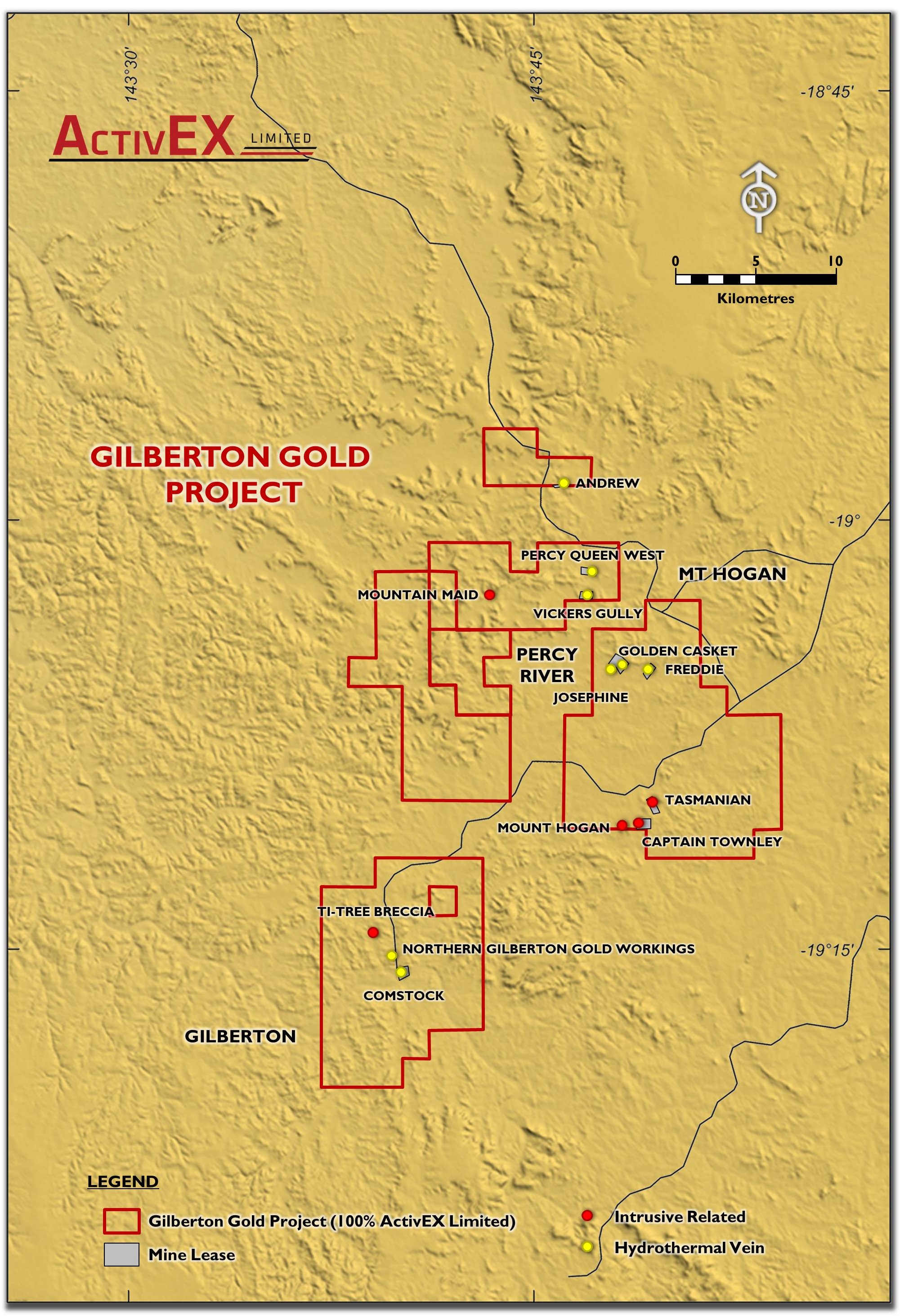 Numerous companies have carried out surface exploration programs in the Gilberton Gold Project area and several occurrences have had limited (and mainly shallow) drill testing. The most recent exploration in the area was carried out by Newcrest Mining, who conducted extensive grid soil sampling, local ground geophysical surveys, and limited diamond drilling. The most advanced prospect within the tenement area is the Ti-Tree Breccia and nearby breccia-hosted prospects. Newcrest had planned to test this prospect with deep diamond drilling but the company ceased work on the tenement before this was carried out.

Results from historical drilling and surface sampling of prospects within the Gilberton Gold Project include:

The geology of the Gilberton Gold Project area is dominated by Proterozoic metamorphics and granites, with local mid-Palaeozoic intrusions, fault-bounded Devonian basins, and Early Permian volcanics and intrusions of the Kennedy Association. The main units occurring within the project area are: 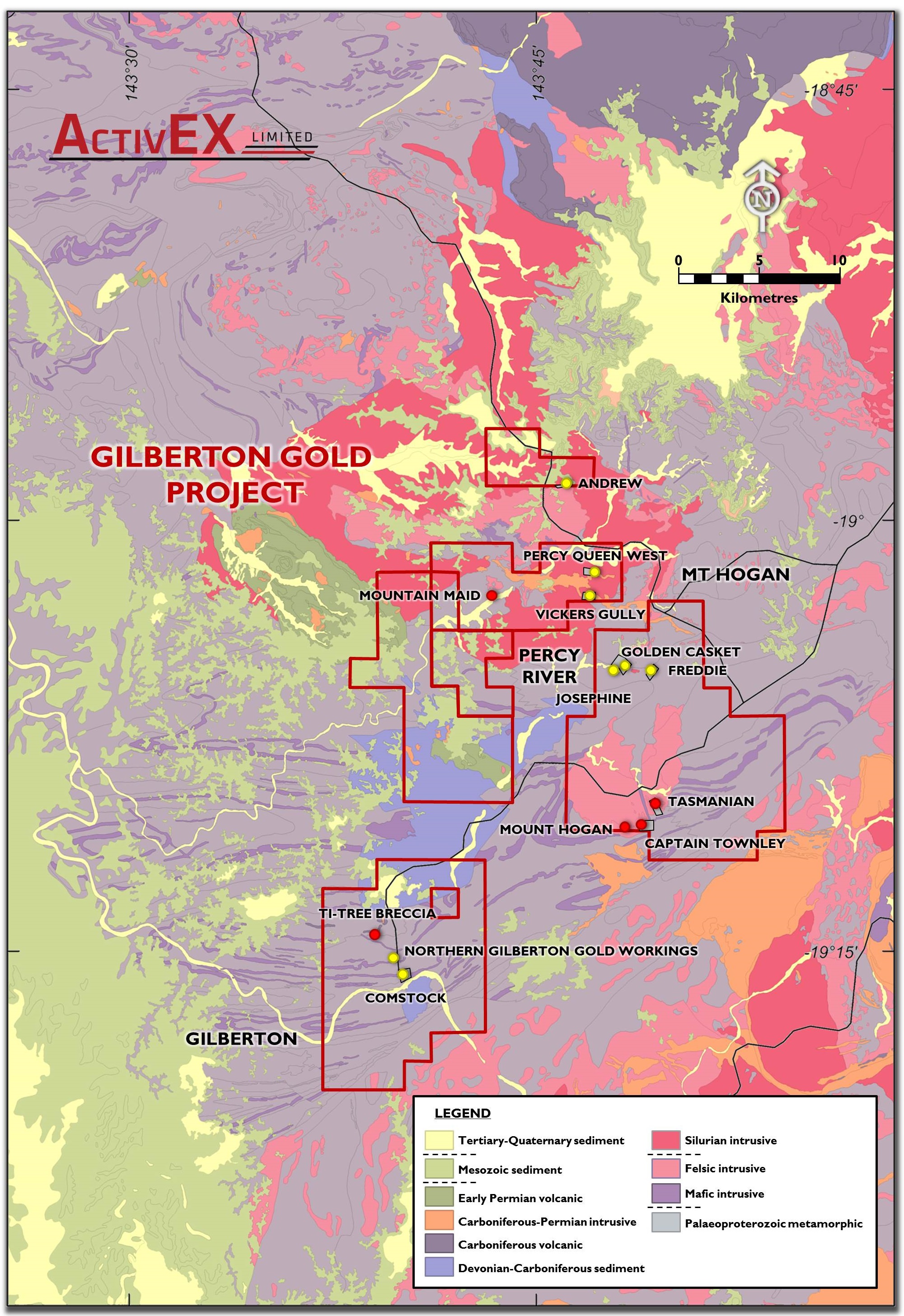 Figure 3: Gilberton Gold Project geology (including the main mineral occurrences referred to in the text) 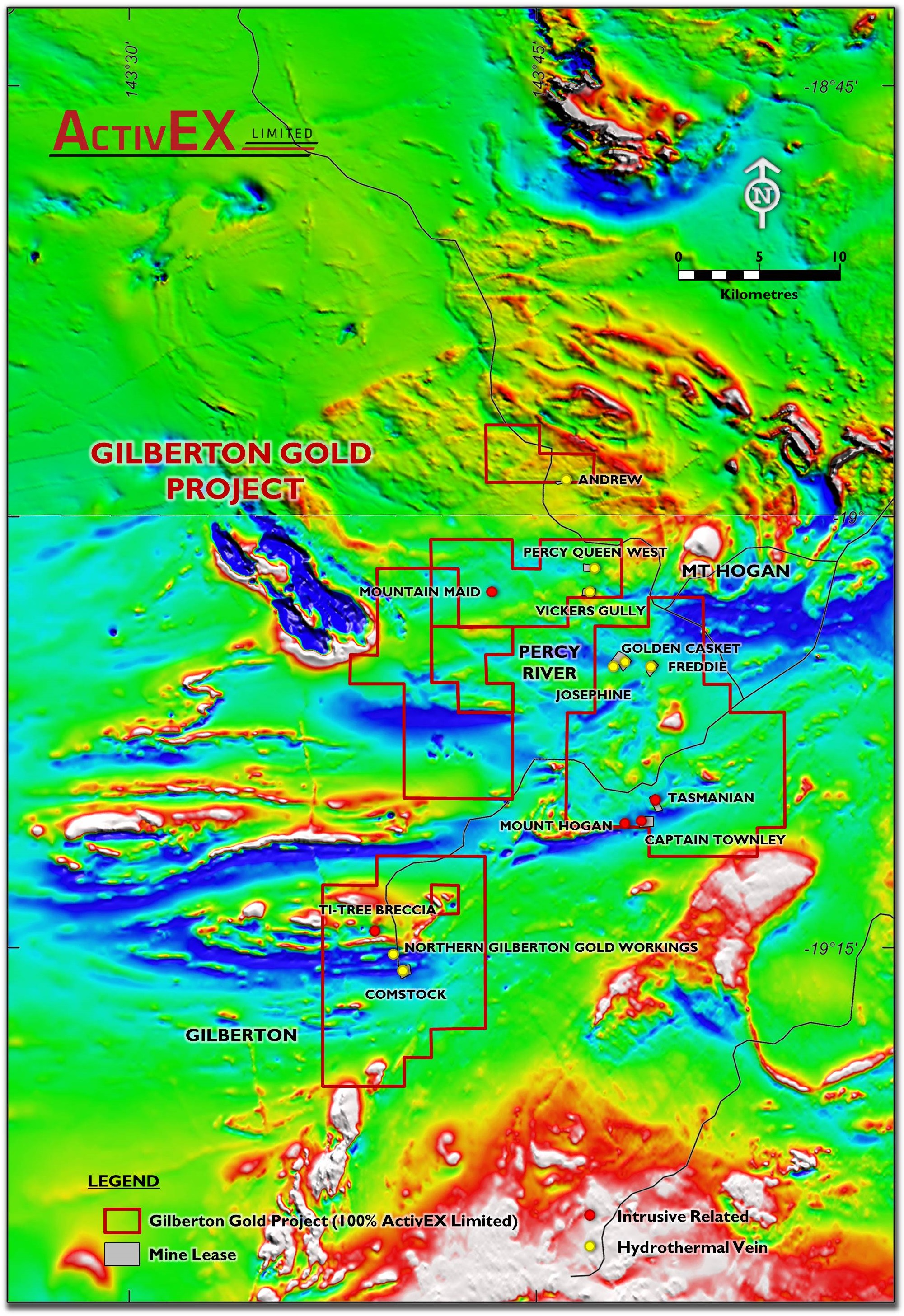 The area encompassed by EPM 18623 hosts numerous occurrences of anomalous gold, locally associated with anomalous silver and/or base metals. Several companies have conducted exploration programs within the tenement area;  exploration activities have comprised a desktop review and reconnaissance traversing and prospect assessment.

The rhyolite breccia is  and framework-supported, with sub-angular to angular fragments of rhyolite, Proterozoic metasediments and silicified sediments. Breccia matrix alteration consists of a quartz-adularia-specular hematite-ankerite/siderite/calcite ± muscovite assemblage. Abundant specular hematite occurs as veins and infill to the breccia. Quartz stringer and ladder veins occur  to the breccia.

The rhyolite breccia complex lies at the interpreted intersection of the Orotava and Ti-Tree  and is covered by a moderate (2 x background) IP  high, and a partly coincident >l00ppb Au soil anomaly covering a 300m x 150m area. Mineralisation is considered to be related to N-S striking quartz-magnetite-pyrite veins.

Anomalous tungsten occurs at the prospect although no scheelite was identified. One rock sample returned 264ppm W and high W values (45 – 700ppm) in soils  an anomalous halo around the Au mineralisation.

Limited drilling by BP/Seltrust, EZ and Kidston Gold Mines, within the prospect area intersected weakly to moderately anomalous Au, including:

Although previous explorers have conducted dedicated exploration programs over the Ti-Tree breccia area, the drilling programs have been shallow (<155m depth).  In 2007 Newcrest planned to test Au-anomalous rhyolite breccia at the Ti-Tree prospect with a 350m – 500m hole below the surface expression of the breccia. Newcrest relinquished the ground before this hole could be drilled.

Numerous shafts and pits are located on steeply dipping narrow quartz veins over a wide area north of the Gilbert River. Newcrest drilled two holes in this area, with the best results being:

This prospect is located approximately 600m north of the Comstock breccia deposit and was identified during  prospecting. It is located in a previously unrecognised/unmapped intrusion and comprises an area of altered porphyritic felsic intrusion with nearby rhyolite dykes.

Prospective units in the prospect area include:

– Ferruginous,  and magnetic breccia within the area of felsic intrusion.

A rock chip sample from a sample of  breccia returned:

This is a grassroots prospect but it has several characteristics that  it warrants further investigation including a felsic intrusion, alteration with locally intense hematite, brecciation with magnetite, and anomalous Au, Ag and W.

The area encompassed by EPM 18615 hosts numerous occurrences of anomalous gold, locally associated with anomalous silver and/or base metals. Several companies have conducted exploration programs within the tenement area;  exploration activities have comprised a desktop review and reconnaissance traversing and prospect assessment.

This is an area with several historical gold workings. The most extensive modern exploration carried out in this area was by Balmoral Resources in the 1980’s.  Exploration included geology and alteration grid mapping over the Mountain Maid and Homeward Bound area – covering approximately 3.5km x 2km. The central part is highly anomalous in Au and Ag in drainage samples.

The Mountain Maid – Homeward Bound area was interpreted to occur within an ENE trending graben structure cut by NW trending faults; rhyolite and dolerite dykes have intruded along the faults. (The Homeward Bound prospect is covered by a mining lease that is not held by  Limited.)

Historical production from this deposit was 200oz Au from 159t.

The material mined at Mountain Maid appears to have been sub-horizontal quartz-sulphide veins.

Newcrest (1997) concluded that bulk tonnage potential lies within small stockwork quartz veins with strong local sericite alteration, which may extend beyond the limits of previous mining and possibly under recent alluvial cover to the north.

The Josephine deposit was mined by Eltin Minerals in the 1990s and produced 65,000t @ 4.1g/t Au and is currently held under mining lease applications (not ). The deposit also contained sub-economic Cu and Pb. Mineralisation is hosted in gently dipping veins in Proterozoic metasediments, with hematite and pyrite the main gangue minerals.

Deep soil sampling and drilling by Eltin and Kidston Gold Mines identified two elongate anomalies along strike to the east and west of the Josephine.  Drilling on the Eastern anomaly intersected poorly developed weak mineralisation. Drilling on the Western anomaly encountered encouraging grades at depth.

No further information is available in open file reports; it is not known if Eltin subsequently carried out further exploration on the Eastern and Western anomalies.

This is an area with prospective geophysical and geochemical features that has not undergone any substantial exploration.

A bullseye magnetic anomaly is located at the north-eastern tip of the Mount Hogan Granite, just to the north of Mount Moran. Several historical stream sediment samples returned anomalous Au:

The Gilberton Gold Project is located in the Georgetown Province, approximately 300km west-northwest of Townsville.

The Project consists of 3 granted EPMs that cover a total of 464 sq. km.

The Gilberton Gold Project is located in an area that is prospective for a number of metals and a wide range of deposit styles.

Multiple centres of alteration associated with veining, brecciation and anomalous metals have been identified.